Last weekend, the girls and I were so excited to participated in the Milwaukee Cookies for Kids’ Cancer bake sale.  We were honored to donate and so excited to learn that the entire event raised $2100 for pediatric cancer!

I decided to make my most favorite baked good – Oatmeal Caramelitas.  They are a buttery oatmeal bar filled with ooey gooey caramel and sometimes, depending on my mood, chocolate chips.  This is my sister’s mother-in-law’s recipe which I requested after having just one bite of these delicious treats. 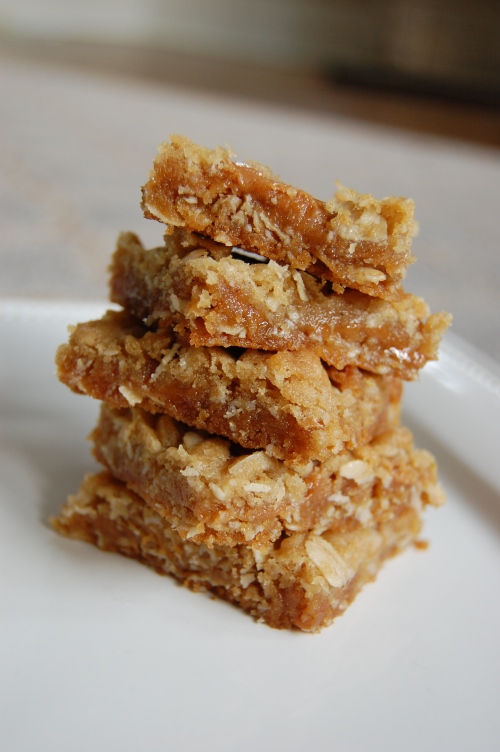 Mix the flour, oats, baking soda, salt and brown sugar in a large mixing bowl.    In a separate bowl, soften the butter in the microwave until it is slightly melted.  Mix the butter into the dry mixture and set aside.

Bake the bottom crust at 350 degrees for 10 minutes.  While that is cooking, mix the caramel topping with the flour in a small bowl.  When the crust is done cooking, remove it from the oven and carefully drizzle the caramel over the crust.  Keep in mind that the crust is only partially cooked, so it will be slightly fragile.  (If you would like, sprinkle a handful of chocolate chips or nuts over the caramel for some extra flavor or crunch!)

Crumble the remaining crust over the top and bake for an additional 15-17 minutes.  Remove the bars from the oven, they will look undercooked when you take them out.  Be sure not to over bake or they will become hard as a rock.  Allow them to cool before cutting. 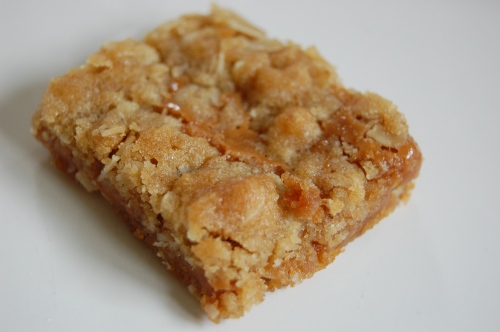 These are much easier to cut and remove from the pan when they are completely cool, but they taste so good warm…so I usually sneak a few corners so I can get a few warm bites.  These are delicious on their own or heated up and served with ice cream.