This year I made my first foray into the world of CSAs. With just my husband and I to eat the goods, I had always been leery about spending money only to end up with seven gazillion pounds of tomatoes or a mountain of squash that we couldn’t eat fast enough. So instead I tested out a six week spring share with Milwaukee’s Braise RSA – minimal commitment plus nothing going on in my garden yet to compete.

Braise is run by local chef, Dave Swanson, who makes his boxes a little more special by including a recipe each week. Last week when I got a large bundle of rhubarb, this tasty muffin recipe came along with it. As a big fan of rhubarb and of streusel, this was right up my alley. 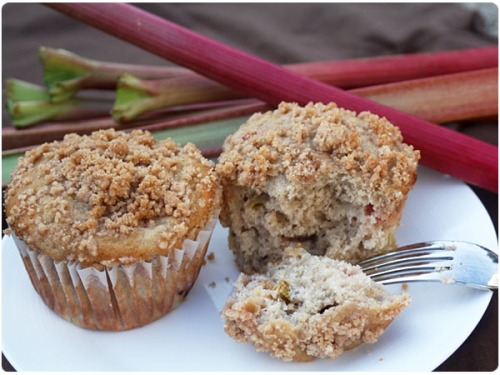 In a large mixing bowl, combine flour, sugar, baking powder, baking soda, cinnamon and salt and whisk well. In a separate bowl, whisk together sour cream, melted butter, eggs and vanilla until smooth. Gently combine the sour cream mixture with the dry mixture with a spatula until just combined. Gently fold in the diced rhubarb. The batter will be thick. Spoon batter into the muffin cups, filling to near the top.

In a small bowl, combine ingredients for topping. Use a fork or a pastry cutter to mix together until crumbly. Sprinkle the topping over the batter for each muffin. Bake until golden, 15-18 minutes, or 3-4 minutes longer for Texas size cups. 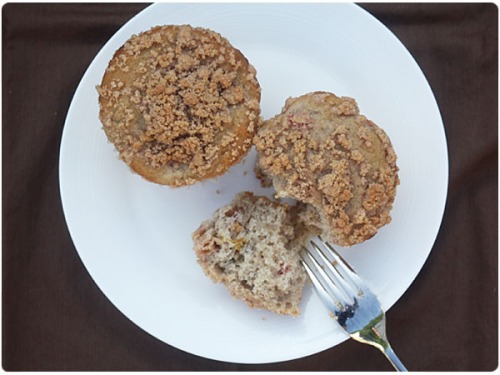 CSA Thoughts:
Overall the quality of produce has been amazing and it’s been fun to try odd new items like ramps and nettles among the lettuce and asparagus. I’ve been cooking, blending and freezing away but it’s still been a little hard for me to keep up since spring veggies are fragile and go bad quickly. A summer share on top of my own overflowing garden would definitely be too much for me but would be great if you have a larger family or maybe split it with a friend. The jury is still out on if I’ll do it again…although with an extra mouth to feed arriving soon maybe the volume would be a better match!

Do you do a CSA?  Do you have tricks on how to manage the volume of produce?  Please share!