{Baby Shower} Gather in the Garden

We are so excited that HAP’s very own Katie will be welcoming a new little bundle this summer. Last weekend, we “Gathered in the Garden” for a garden-themed baby shower in her honor. This baby shower was just like Katie, a little fancy and a little rustic. With fresh, summer salads and cool beverages, we were able to celebrate the coming of this sweet baby boy on a warm summer day in the shade.

For the invitations, we printed the information on kraft paper, which can be found at your local craft store or paper store, using the font Made with B. For the carrot in the lower corner, we used a wine cork, cut a few slices out of the bottom and dipped it in ink. The leaves and roots were drawn freehand with a permanent green thin-tipped marker. These invitations were very easy to make and can be done by anyone with a computer and printer. 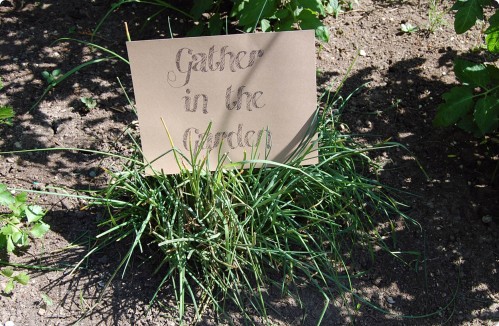 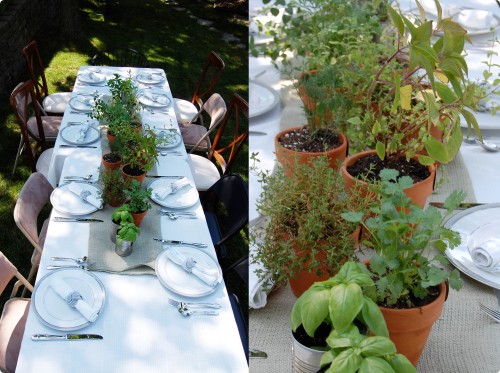 The table was set shaded in the garden. We used white and silver china place settings on white table clothes. A strip of green burlap ran down the middle of the table with potted herbs scattered throughout.

The ladies sipped on raspberry lemonade cocktails: half Simply Lemonade (raspberry flavor), half champagne. They were topped with mint and frozen strawberries. Very refreshing on a hot summer day!

All the lunch dishes featured fresh herbs from Stef’s garden. The Peach Caprese was a big hit. Just a twist on the traditional tomato salad: Sliced peaches, sliced fresh mozzarella, fresh basil and a drizzle of white balsamic vinegar. 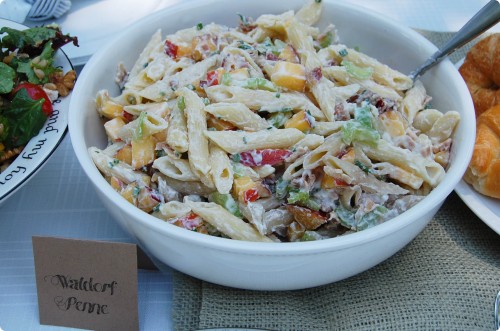 Waldorf Penne, a recipe from Rachel Ray Magazine, was served with fresh chives. 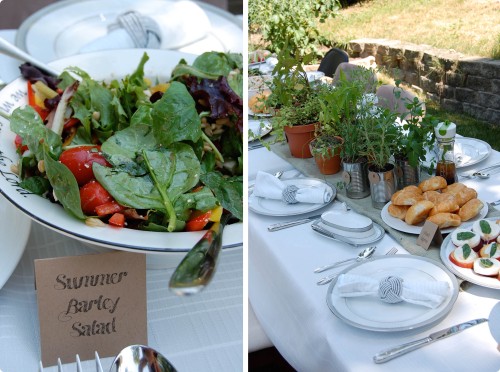 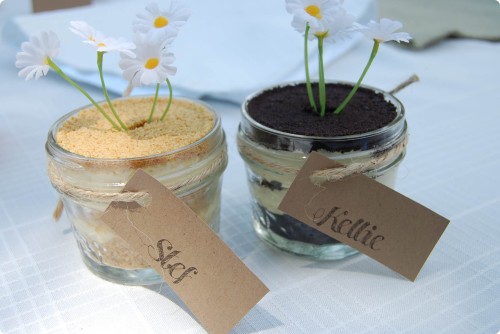 Anne made dirt cups placed in small mason jars, topped with miniature flowers and tied kraft paper with each guests name around the edge. Katie and Stef ate “sand” instead of “dirt” due to their uncommon aversion to chocolate. 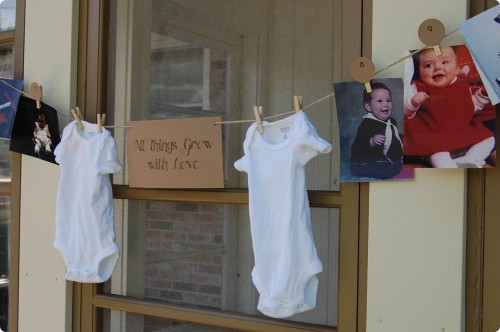 All guests were previously asked to send the hosts a baby picture. The pictures were printed and tied on a makeshift clothes line with some newborn onesies. Guests were given a worksheet and asked to figure out each baby in the pictures. It turned out much more difficult than expected, but a lot of fun!

The second game was “Name that Herb.” All centerpiece herbs were numbered, using the same font and kraft paper as the invitation. The winners of each game won homemade jam or conserve made by fellow blogger Colleen of Flee Fly Flown. The herbs were passed out as party favors at the end of the day.

We look forward to welcoming our next haute baby into the group!